On hundreds of occasions since August, ambulance crews have alerted the emergency room staff at Shaare Zedek Medical Center in Jerusalem: a victim of a terrorist attack is on the way in.

The clock begins ticking and the Shock and Trauma Unit in the Weinstock Family Department of Emergency Medicine on the Fanya Gottesfeld Heller Floor begins to marshal its resources. In minutes, all necessary equipment and supplies are at the ready including units of blood and blood products for transfusion, and a team of doctors, nurses and other staff —  who vary according to the nature of the incoming patient’s injuries — are on hand, waiting for the ambulance. 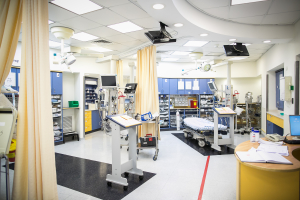 A quiet moment in the Shock and Trauma Unit at Shaare Zedek’s Weinstock Family Department of Emergency Medicine on the Fanya Gottesfeld Heller Floor — Photo by Kruter Photography / kruter.com

Tragically, this scene has been replayed at Shaare Zedek more than 250 times in recent months, as of this writing. The victims of stabbings, shootings and deliberate vehicle rammings have included men, women and children — soldiers, expectant mothers, sabras and recent olim.

Politics are left outside the Hospital’s doors.

“We have Arab doctors treating Jewish patients, and in the next bed, Jewish doctors treating Arabs, maybe attackers,” explained Dr. Ofer Merin, a cardio-thoracic surgeon who is deputy director-general of Shaare Zedek and executive director of the Trauma Unit. “I never try to match an Arab physician to an Arab patient, or a Jewish physician to a Jewish patient, even though language makes it easier. It would be like saying: ‘OK, you’re an Arab, you treat the terrorist.’ No. If someone is shot and comes in, he is treated the same as anyone else who is shot.”

However, while the question of prioritizing an innocent victim over his or her attacker hasn’t come up thus far at Shaare Zedek, Dr. Merin notes that a circumstance could arise when such distinctions would have to be made.

The work of the Ethics Committee is significant at this difficult time, he added, and offers doctors great comfort.

Even when a patient’s chances for survival are slim, “I will fight for his life,” Dr. Merin said. He personally calls the families of the injured, “because I know what they are thinking is awful. Nothing prepares them for a phone call in the middle of the night. I explain the situation calmly and tell them to get into their car and come to Shaare Zedek, but to drive slowly.” 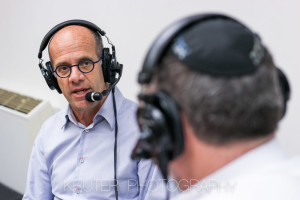 His briefings to reporters out on the ambulance bay about the status of terror attack victims have made Dr. Merin’s face a familiar one to Israelis. Several times, he and his trauma team have been shadowed by television news crews telling the story of how Shaare Zedek successfully treats victims of terror while also contending with all of the sensitivities that the political situation demands.

To the Shaare Zedek staff, treatment includes providing for all of a patient’s medical needs, as well as for the needs of the patient’s family. This could include developing plans for post-release from the hospital, helping family members to address any limitations thrust upon their loved one as a result of his or her injuries, and much more.

“The staff became like family,” one patient shared. “They were so caring and sensitive to me and my entire family. I was hospitalized for quite a while and the staff offered my family assistance with so many different things, explained things patiently, and members of the staff from other departments even came to visit me.”

The Department of Emergency Medicine ranked first in a nationwide survey of emergency rooms throughout Israel last December, according to Israel’s leading business newspaper, The Marker. Shaare Zedek has also been asked to help provide medical training to several groups including volunteers from Hatzalah (EMTs — emergency medical technicians — and paramedics, who serve as first responders) and soldiers who will be serving as paramedics during their military service.

Not every patient can be saved, but the extraordinarily-caring, seasoned medical professionals who staff Shaare Zedek take opportunities to show compassion and lovingkindness even after life ends.

Naama Bagrish, head nurse in the Department of Emergency Medicine, recently recalled to a reporter for Israel’s Channel 10 News a man who was unfortunately declared dead on arrival at the Hospital after a bus bombing in Jerusalem. He had no identification. Hours passed and no one inquired about him.

“It’s very, very difficult,” Nurse Bagrish said. “You realize that this person…was all alone in the world.” After he was finally identified, she and her emergency department colleagues turned to various organizations and to their connections on social media, “for people to come, so he’d have a respectful funeral, and hundreds responded and came. We cleaned him up and got him ready, and I think we gave him our last respects,” she said simply. Some of the medical staff attended the service and Deganit Kobliner, senior nurse in the Department of Emergency Medicine, offered a short eulogy.

“You don’t develop an immunity, and oy va voy, if we developed immunity,” Professor Jonathan Halevy, Director-General of Shaare Zedek, recently explained to a reporter. “The sights are very, very difficult, but you do develop a capability to get through it. It’s not that you don’t wake up at night, but at least the mental impact does not affect performance.”

Mendy Rivkin, critically injured in a recent stabbing, spoke to the media before leaving the Hospital and recalled with great emotion how, “in the ambulance I whispered to the paramedics to take me to Shaare Zedek. To Shaare Zedek! I thank all of the wonderful, professional, caring people — I have no words to describe how I feel. Thank you to the administrators, managers, doctors, nurses, professors, technicians, support staff, cleaners, and physical therapists. Thank you!”

This article was updated on February 23, 2017 with Dr. Merin’s comments at the “Medical Ethics of Terror Attacks” conference on Feb. 17.

By admin|February 18th, 2016|News|Comments Off on Treating Terror Victims At Shaare Zedek