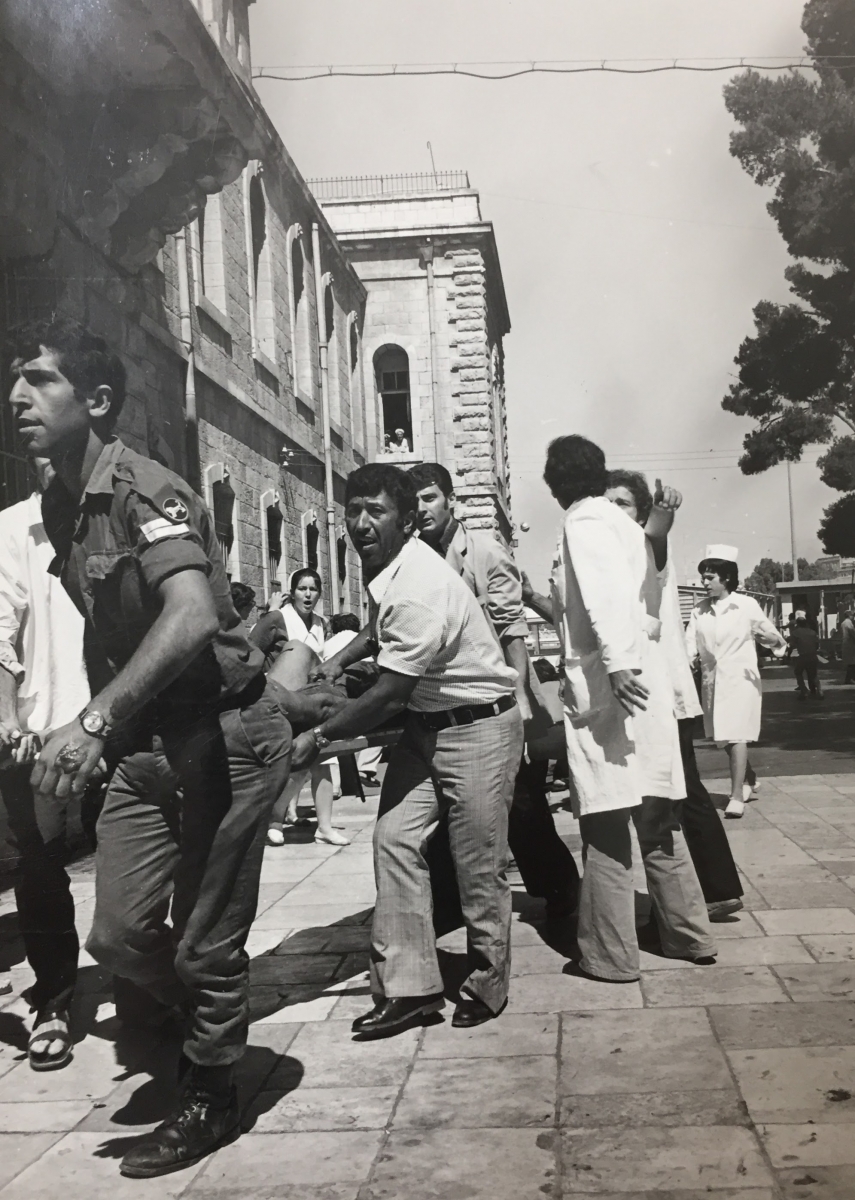 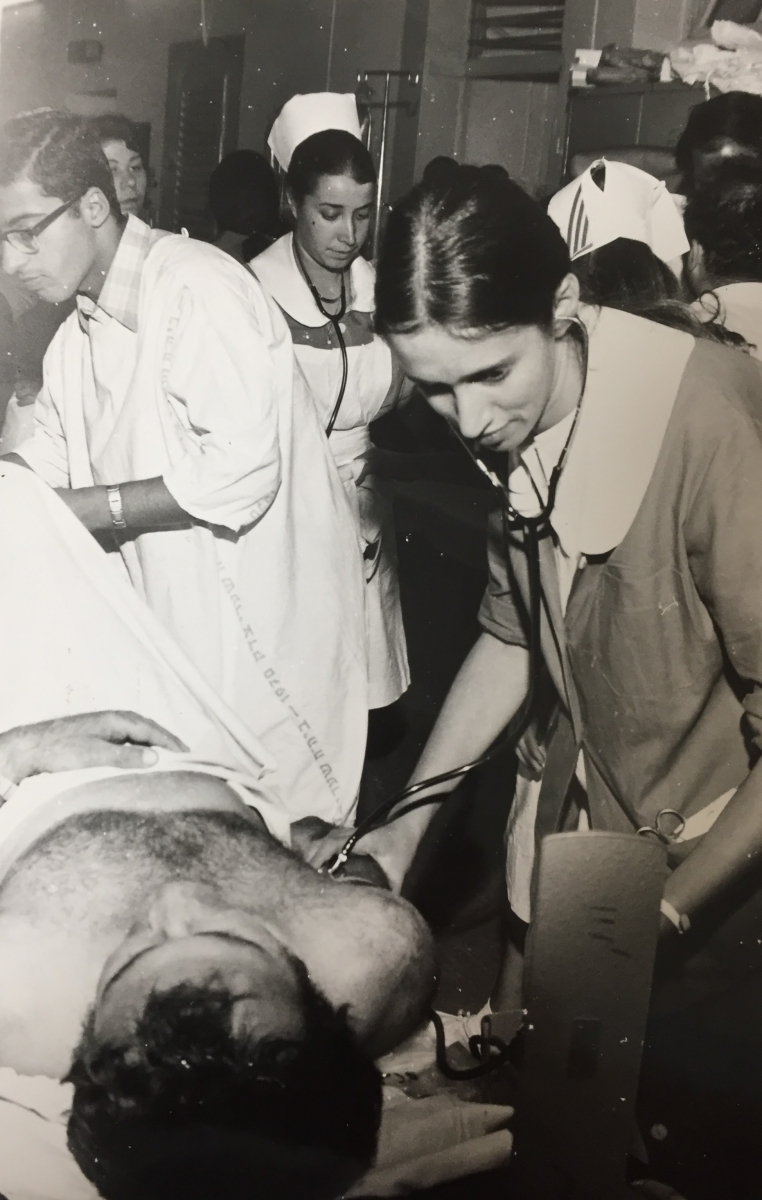 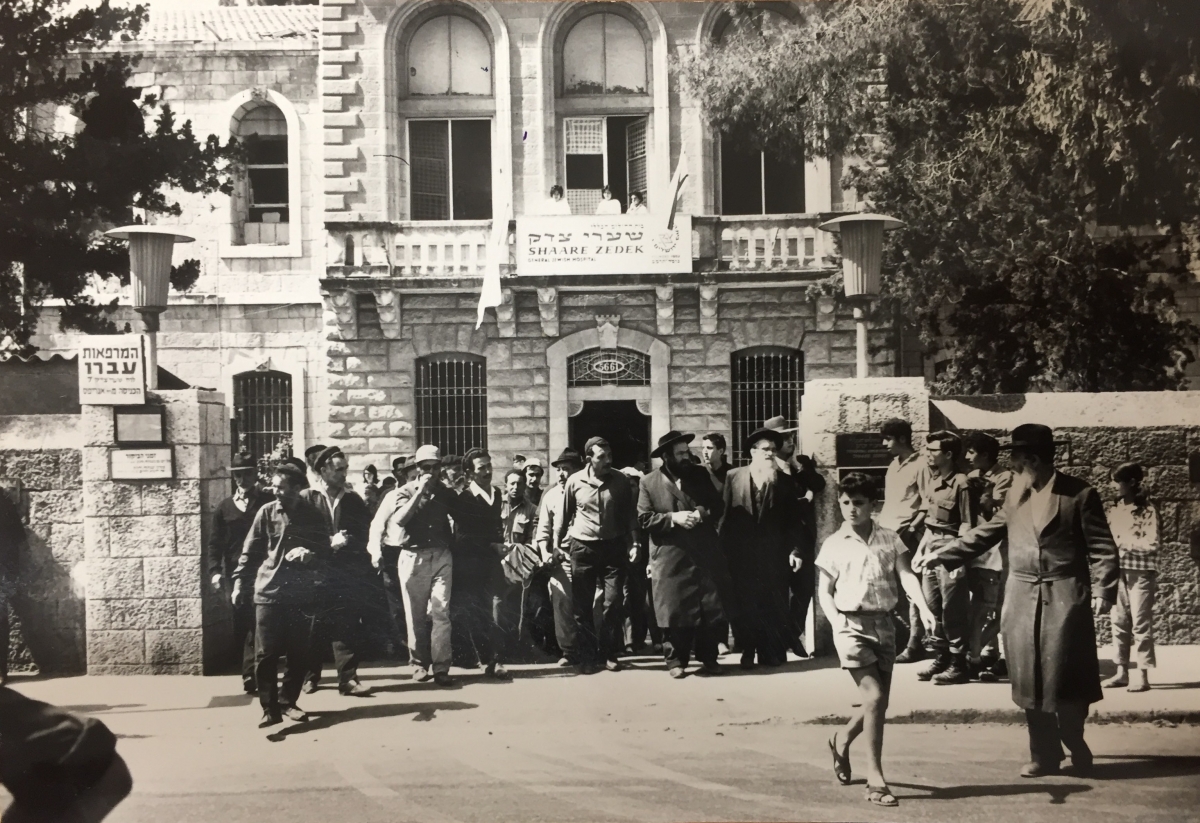 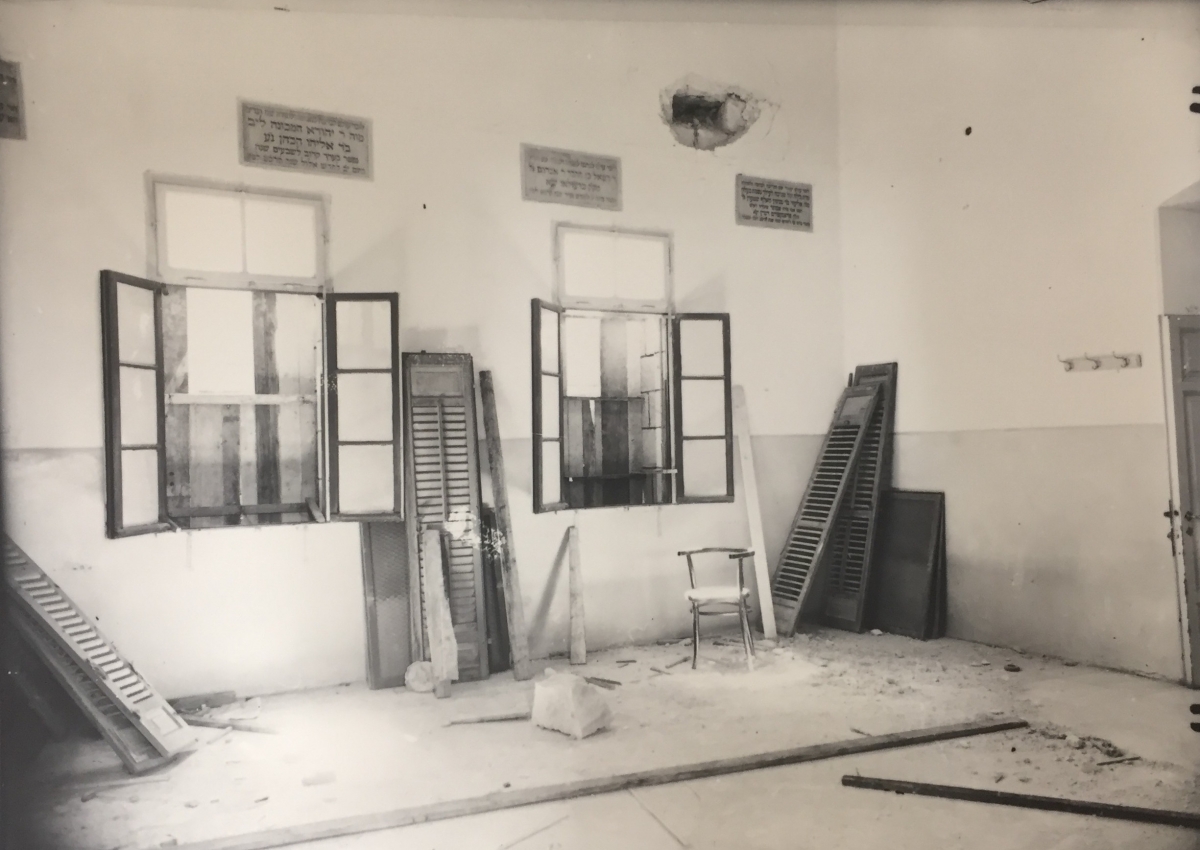 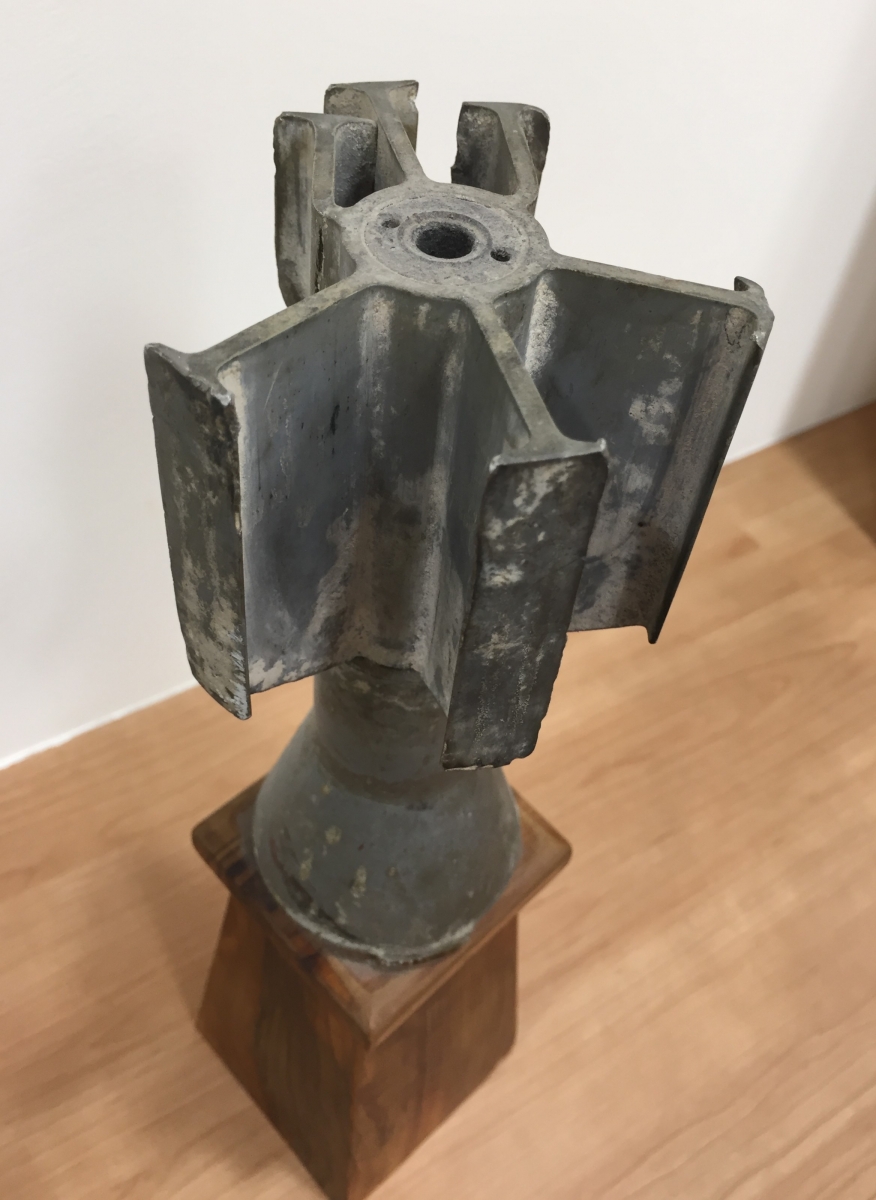 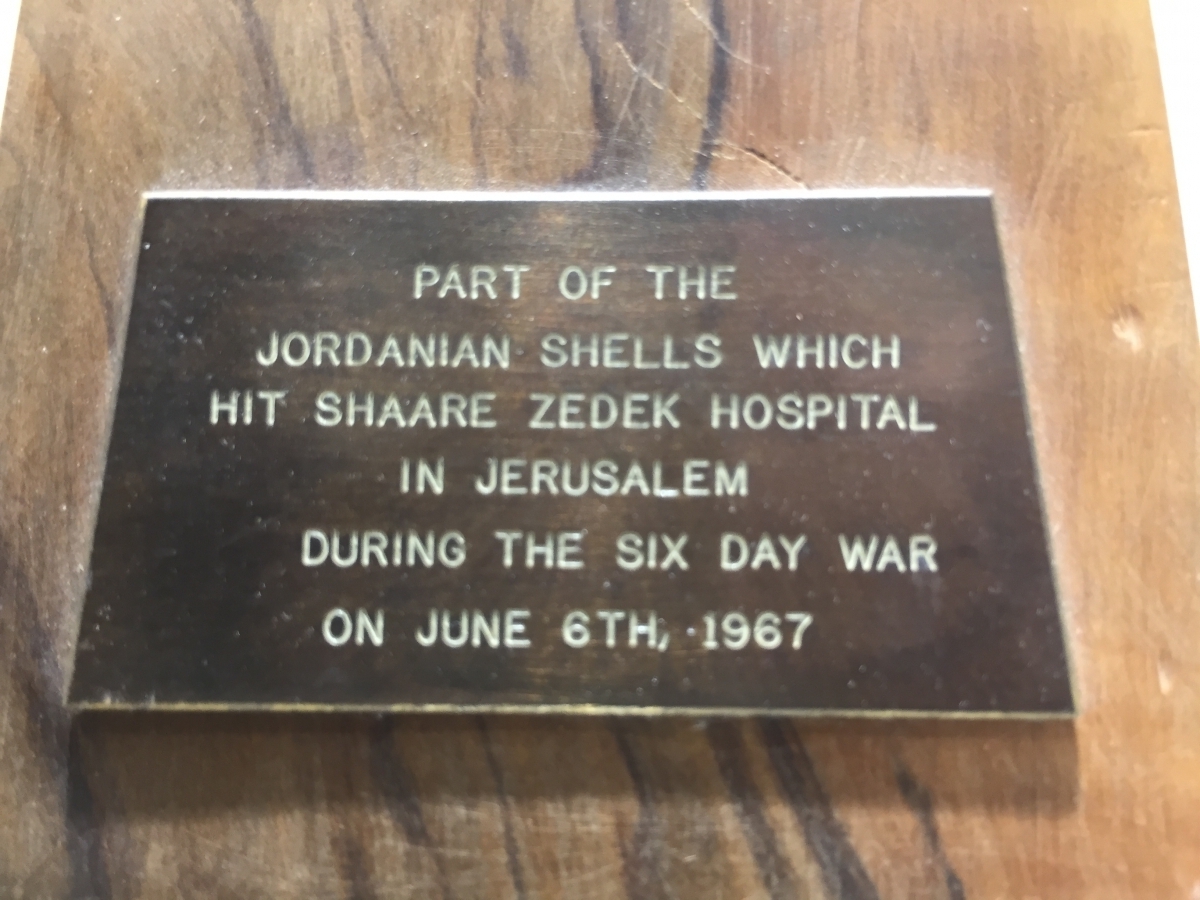 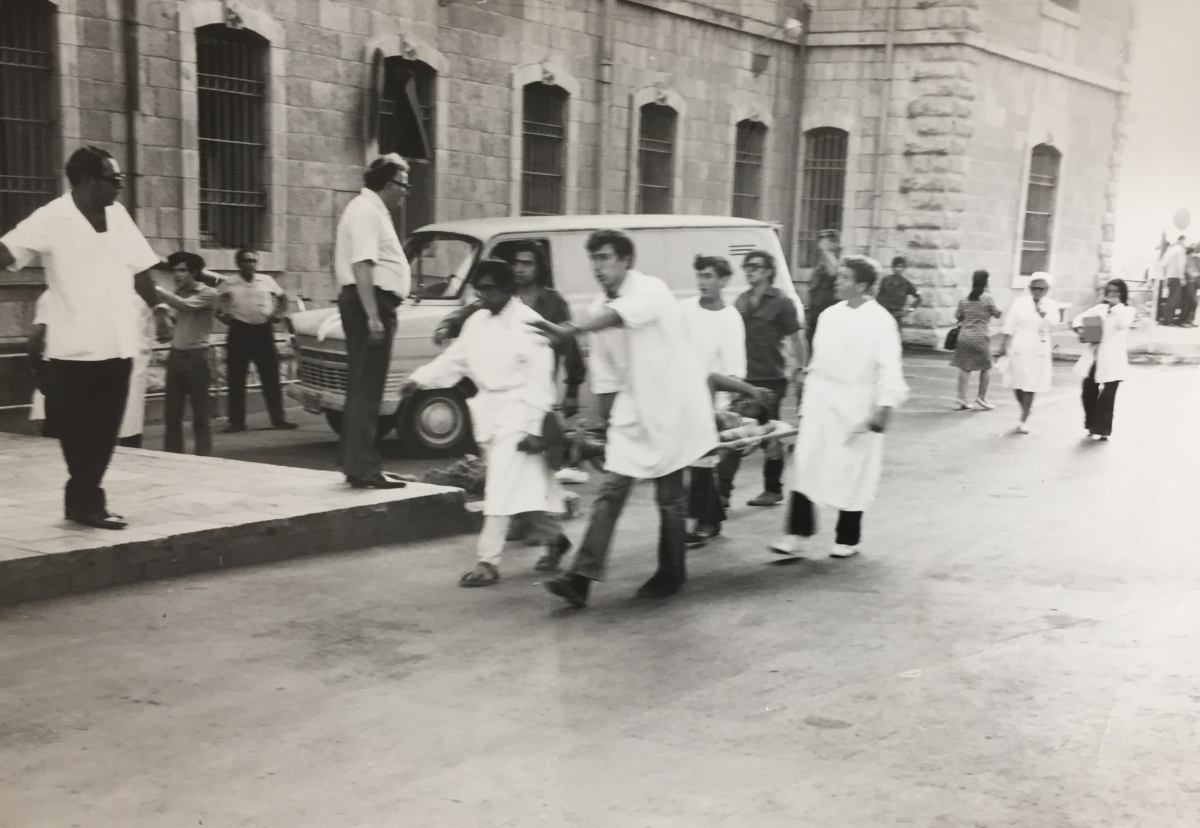 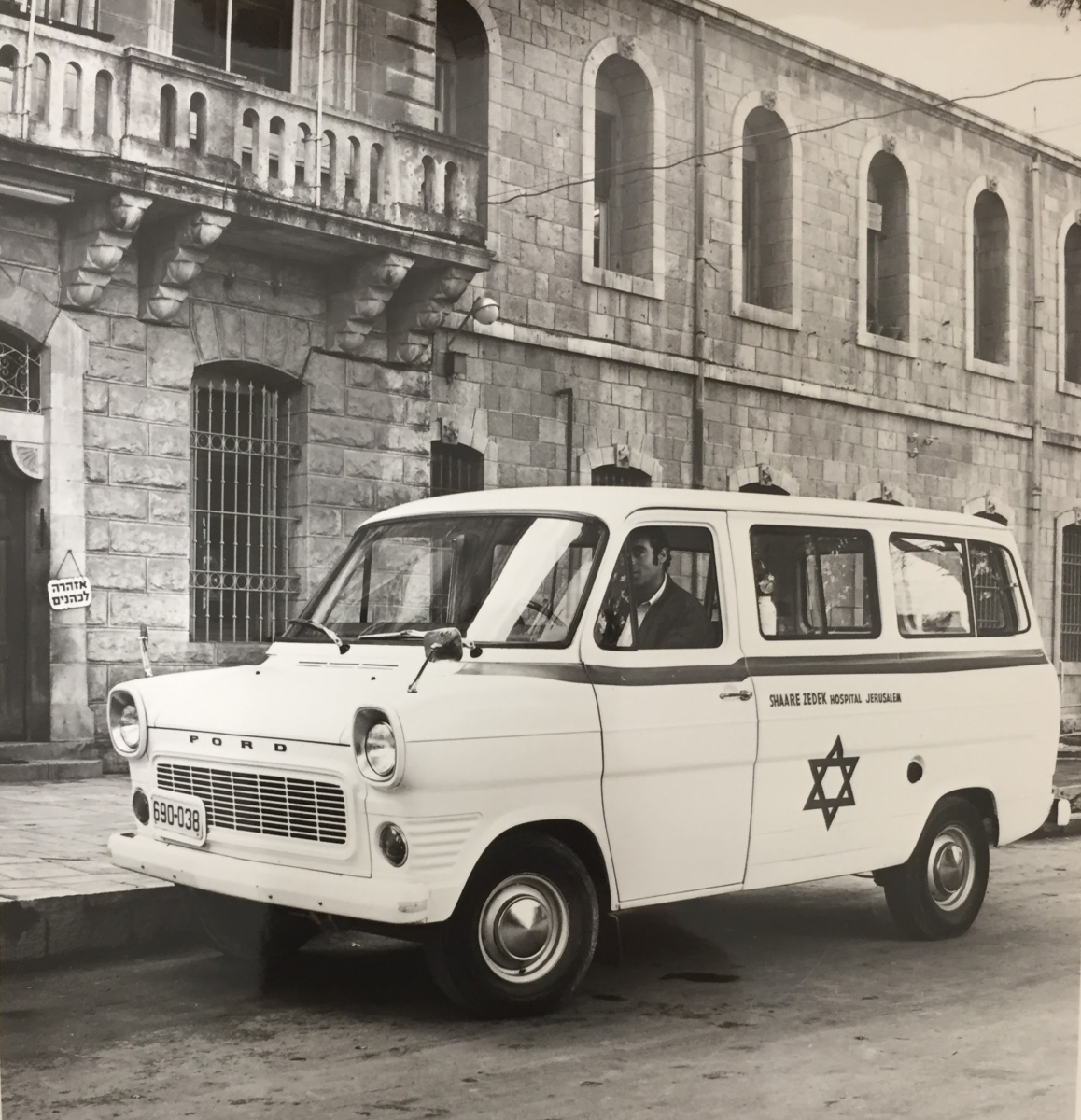 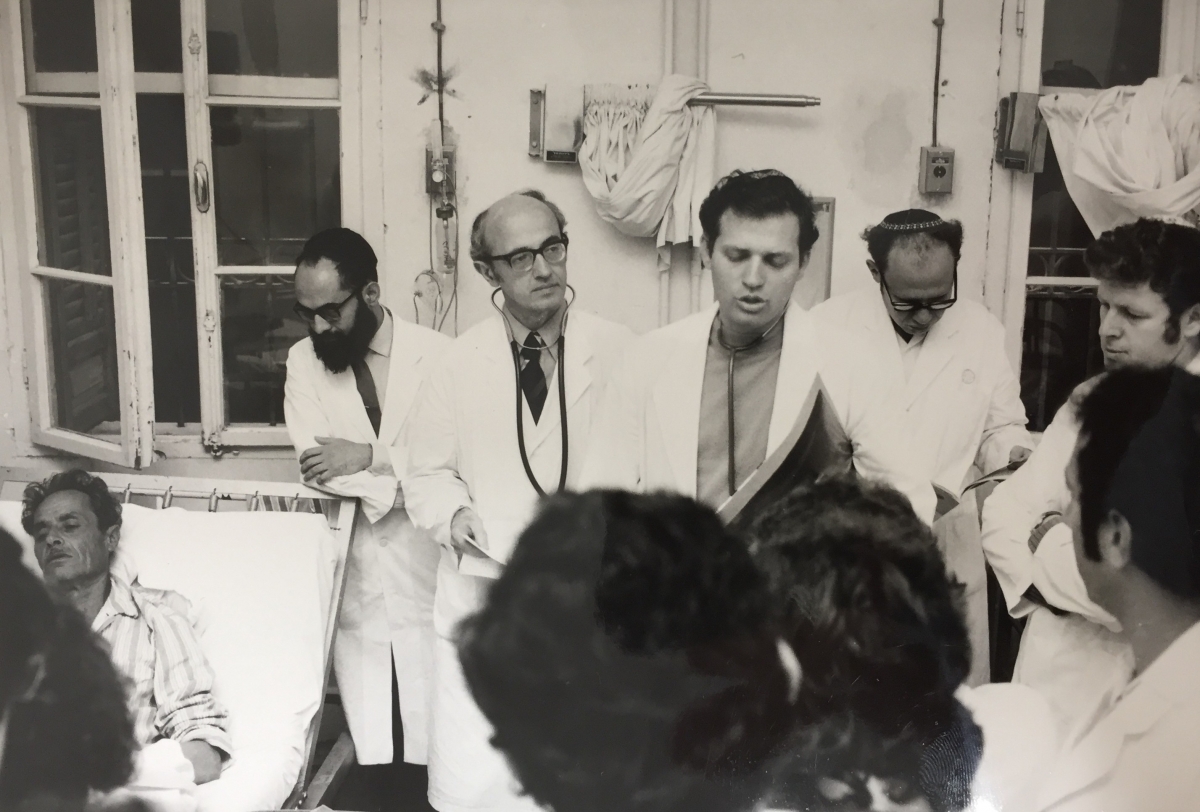 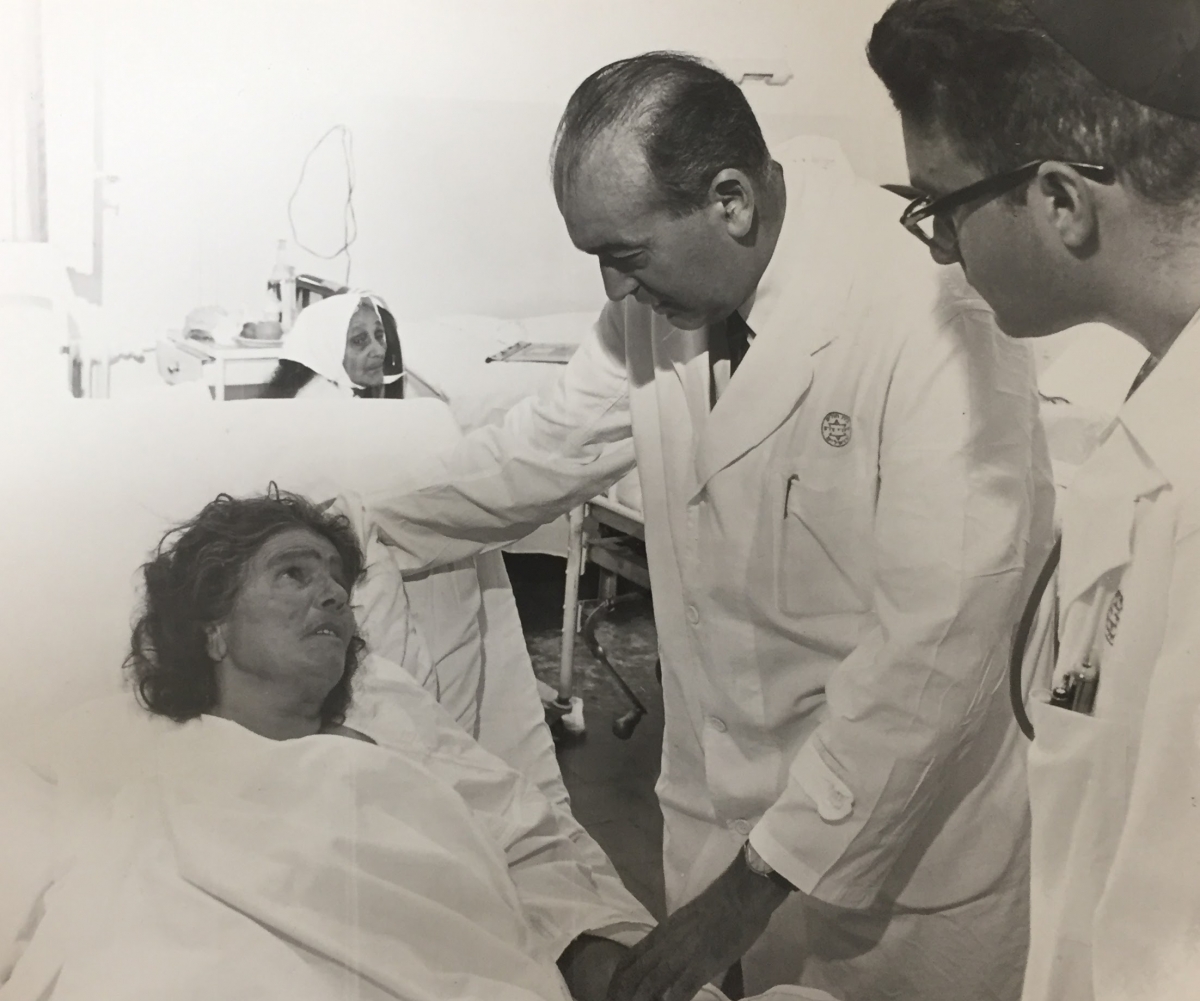 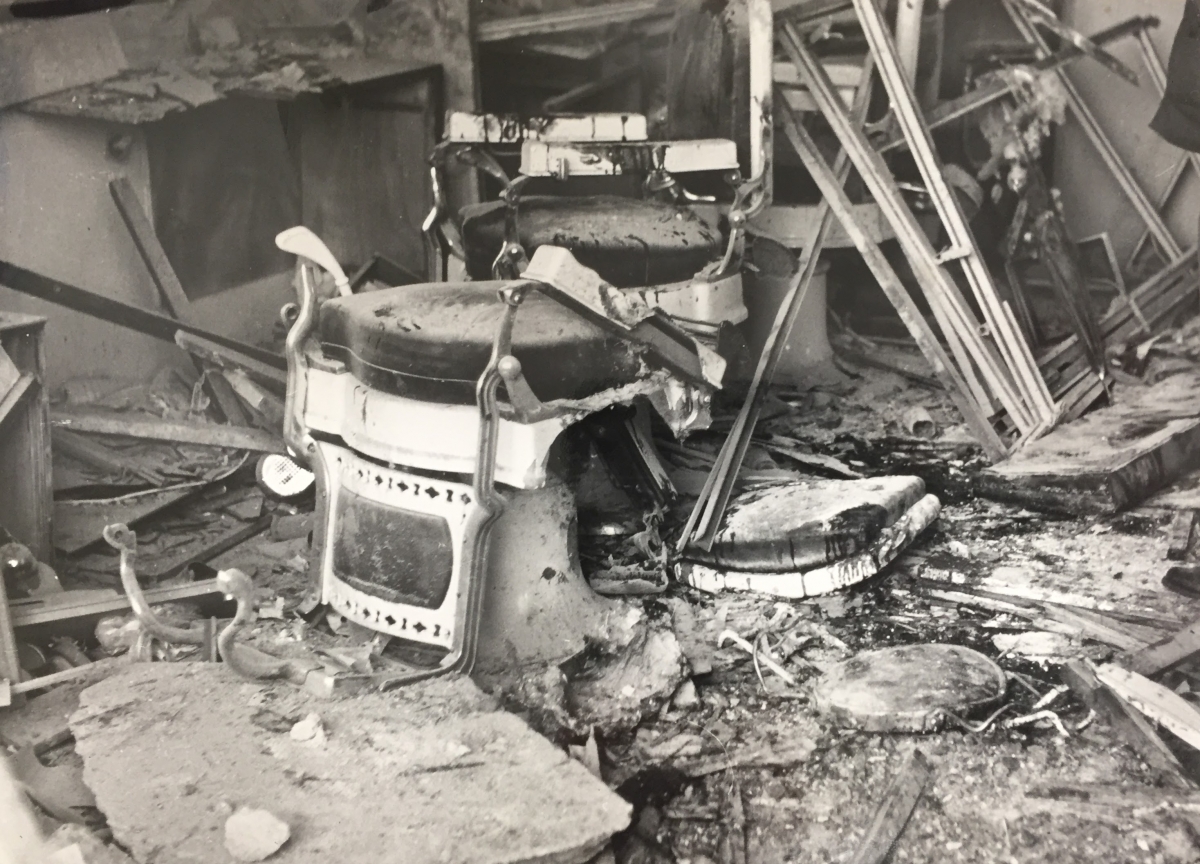 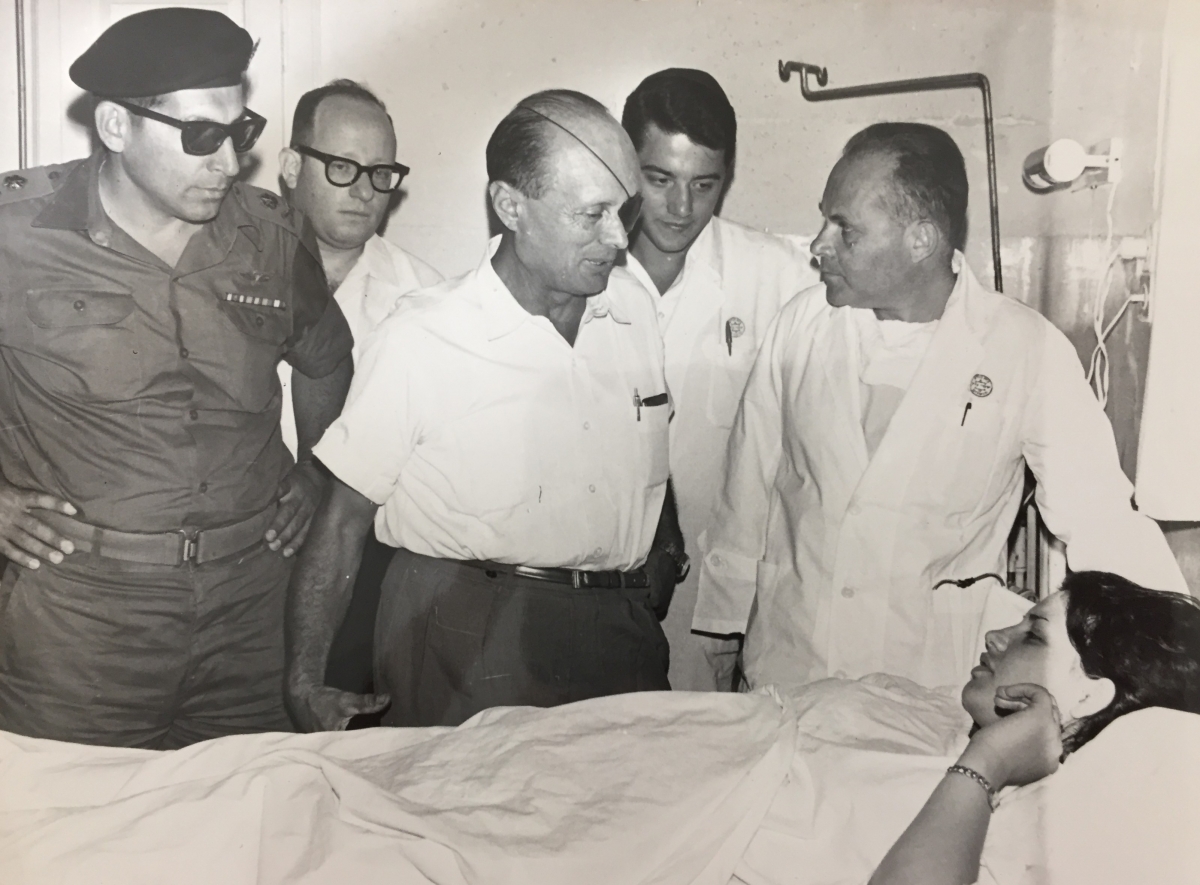 The Six Day War changed the course of Jewish history. When it was over, Jerusalem was no longer a divided city and the Temple Mount was in Jewish hands for the first time in two millennia. But as the fighting raged, Shaare Zedek, then located in its original home on Jaffa Road, was the hospital closest to the combat — just a few short kilometers from the front and under frequent Jordanian fire. The following is a brief account from the Hospital’s archive, including material that was previously published.

In the early hours of Monday, June 5th, 1967, the telephone hotline from Israel’s military headquarters rang at Shaare Zedek. It was a short conversation, not lasting longer than 15 seconds. Neither did it take long for the Hospital’s well-oiled “State of Emergency” apparatus to begin to move at full speed. Phones soon rang at the homes of the hospital’s administrative and medical staff. Ambulances rushed out of the gate with urgent messages. Dr. Falk Schlesinger, the hospital’s director-general, arrived inside minutes.

Activity was intense. Groups of volunteers began to take up pre-assigned duties. The emergency generator was activated. Windows were covered with blackout material, sandbags strategically placed. Beds replaced desks. Even the hospital’s main corridors were soon lined with extra beds and stretchers. Ambulances and volunteers with their private cars swiftly evacuated many civilian patients whose release papers had been prepared by the doctors with detailed instructions for treatment at home — just in case.

The Brith Milah Hall, classrooms in the School of Nursing and the nurses’ own dormitories were soon converted into emergency wards. Basement areas were emptied to become shelters. Arrangements were made for volunteers from Shaare Zedek’s Ladies Auxiliary to care for children of the medical staff, especially nurses whose husbands were drafted. The staff would need to be free to focus all of their attention on providing round-the-clock medical aid to the wounded.

Just two hours after the military hotline first rang, Shaare Zedek was fully prepared — a civilian hospital now transformed into a front-line military hospital with a greatly increased bed capacity. A larger than usual staff of doctors and nurses were on duty, medical supplies and equipment on hand. The underground operating theaters and teams of surgeons were ready for action. The volunteers augmenting the hospital’s staff were willing to do any job at the snap of a finger. They included Israeli high school students, including teens performing their ‘Gadna’ pre-military requirement, as well as foreign students. Tirelessly, they helped fill and pile up sandbags, roll bandages, carry the wounded from ambulances, and comfort the injured, in this Hospital with a Heart.

At about eleven o’clock in the morning of June 5, the Jordanians began to shell Jewish Jerusalem and blast border areas with machine-gun fire. The wailing of ambulance sirens was soon heard. Shaare Zedek received the first casualties of the war, among them a young mother who had been carrying her baby as she searched for shelter in the Musrara, or Morasha, a neighborhood between the Old City and Meah Shearim. Tragically, she never made it; her baby was an orphan.

The Israel Defense Forces replied to the attack. Jerusalem echoed with the noise of war. Wounded soldiers were brought in by military and civilian ambulances — over 150 on the first day, alone. Surgeons began their work. They would continue operating non-stop for the next 70 hours under the bright lights of the underground surgical suite and under the guidance of director of surgery, Dr. Alexander Steiner. Several amputations had to be performed that first day but the men were alive.

The headmaster of a girls’ secondary school teamed up with a rabbi from a yeshiva to carry in the wounded. Student volunteers also rushed stretchers from ambulance to emergency ward with remarkable speed and efficiency. Doctors and nurses worked calmly and with dedication. The soldiers, many with severe wounds, were very brave. They did not shout or cry. Some asked that their comrades be treated first — “I can wait, only a few [pieces of] shrapnel…” All present admired their wonderful spirit…soldiers of Israel. Quite a few defied doctor’s orders and after receiving treatment rushed off to rejoin their comrades on the front.

Hardly a day has passed and Shaare Zedek had already received over 150 wounded. The storming of the Old City was yet to come. Only then would the staff and volunteers really see what the horrors of war can bring about.

The first day of battle drew toward its weary end. The sun, a flaming red ball, dropped quickly behind the Judean Hills. Jerusalem was in total darkness but the Jordanian shells continued to fall. Brilliant lights appeared in the sky — they descended slowly, very slowly, illuminating the frontier areas. With screaming vengeance, Israel’s Mirage jets would dive downwards. Then, silence. Darkness. But when would it start again?

No effort was spared to keep the bright lights of the hospital from leaking to the exterior. Inside the 65-year old building, lights burned everywhere as doctors and nurses worked diligently. But volunteers under the direction of a visiting American university professor covered every possible chink of light. They also covered the window panes with strips of anti-blast material. A group of yeshiva boys from America and England then heaved heavy sacks filled with sand into the window frames.

The Quality of Mercy

Jordanian prisoners were treated, too, as was eleven-year-old Hadiya Abu Gardia, an Arab girl found with a wound in her neck. Press reports say Israeli army captain Nissim Ben Israel found her in the Deir Abu Tor Quarter of Jerusalem and brought her to Shaare Zedek. Once there, Hadiya survived cardiac arrest on the operating table; her heart stopped beating but she was revived.

With the fighting only a few kilometers away, some shells fell very near the hospital. It was dangerous to go outside, even just to get some fresh air. The policemen at the entrance warned to keep clear of the doors and windows. The Shaare Zedek campus sustained three direct hits during the hostilities, including one that struck the roof to the left of the main entrance, just above a nursery ward with eighteen babies. Miraculously, the shell did not explode, and no one was hurt.

Doctors, nurses, and volunteers at Shaare Zedek worked around the clock for the duration of the war, saving many lives among the 450 wounded soldiers and civilians they treated in just 70 hours. And during that same period of time Shaare Zedek’s surgeons performed over 200 operations! The Hospital was later lauded by military and civilian authorities for its outstanding life-saving achievements.

Finally, in what might certainly could be taken as a sign from Above, once the war was over, a very curious thing happened on the Shabbat that immediately following. The number of births — which averaged three a day at Shaare Zedek at that time* — shot up to 24, nearly one an hour during a single Shabbat!

*Perhaps even more incredible is the fact that in 2017 about 60 babies, on average, are born each day at Shaare Zedek and its Bikur Cholim City Center Campus. That’s well over 22,000 a year!

By admin|May 23rd, 2017|News|Comments Off on Shaare Zedek’s War: Fifty Years Since Jerusalem Was Reunified, A Look Back at Shaare Zedek’s Role in the Six Day War