At 8:30 am  local time on Wednesday, April 29, the IDF Field Hospital in Kathmandu, Nepal opened its doors and began receiving patients. The largest of its kind that Israel ever set up on a humanitarian mission, the facility is located adjacent to a damaged Nepalese military hospital. It includes operating rooms, fully functioning x-ray facilities, a range of wards and is expected to treat as many as 200 people a day. There is also a helipad nearby, enabling injured patients to be flown in from distant locations.

Dr. Ofer Merin, Deputy Director-General of Shaare Zedek Medical Center, said, “We’re not the only country to send support, but what differentiates Israel is our haste to respond quickly and our rapid organization of our forces and equipment.”

Merin is a veteran of IDF medical relief operations, having supervised field hospitals in all the recent overseas disasters as well as the IDF Field Hospital which was established on Israel’s northern border for the treatment of victims of the Syrian civil war.  He continued, “Speaking personally, every mission is emotional and the more you are exposed to these opportunities, the more challenging it becomes.  In building our team we work to create a diverse staff of both senior medical personnel as well as younger physicians and nurses.  We also make sure to include those who have not been included in prior missions.”

The second photo shows Prof. Jonathan Halevy, Director-General of Shaare Zedek and Director of Internal medicine at the Field Hospital (wearing a cap) helping to transfer medical supplies to the facility.

Dr. Ofer Merin, Deputy Director-General of Shaare Zedek and Medical Director of the Field Hospital, is shown at right in the last photo, crouching over a map as IDF rescue teams strategize. 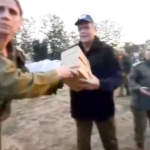 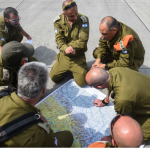 By Shuli Levine|April 29th, 2015|News|Comments Off on Shaare Zedek Physicians in Kathmandu

About the Author: Shuli Levine