Nachum Segal and JM in the AM Visit Shaare Zedek

Nachum Segal and JM in the AM Visit Shaare Zedek 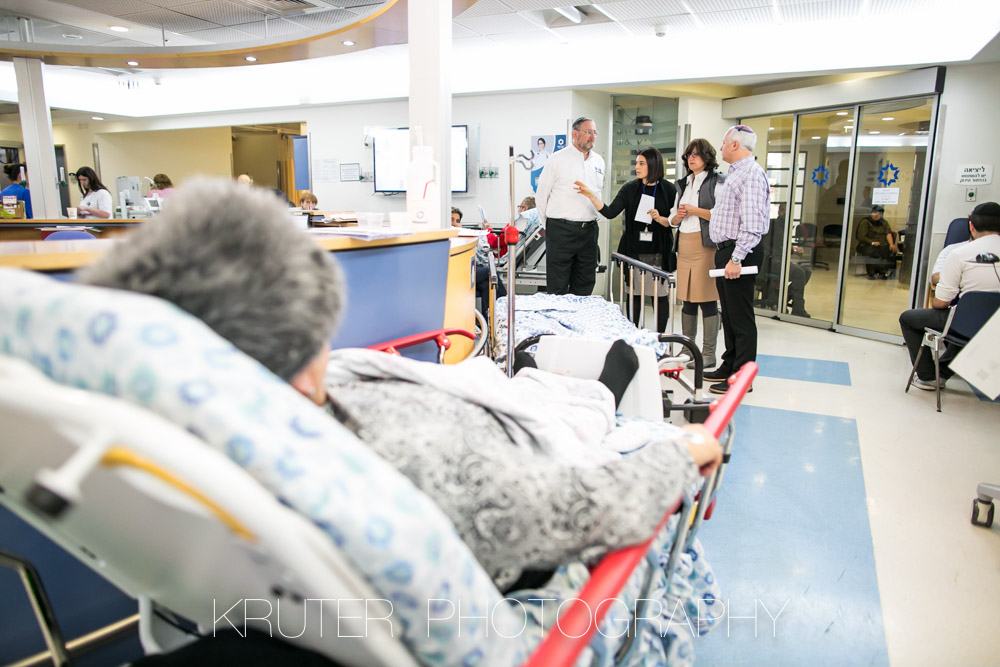 (Jerusalem — Wednesday, February 11, 2016)  Nachum Segal, the US radio personality who hosts the JM in the AM radio program heard weekday mornings by listeners in the New York metropolitan area and around the world, visited Shaare Zedek Medical Center in Jerusalem as part of his Jewish Unity Initiative. Segal is encouraging his significant Jewish audience to step up visits to Israel and support its economy through tourism, and ultimately, to make their home in Israel. He also spoke with Tomer Ditor, 28, who was recovering at Shaare Zedek from injuries he incurred Tuesday when he was stabbed by a terrorist while jogging near Neveh Daniel. 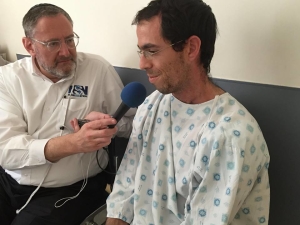 Tomer Ditor, 28, was stabbed near Neveh Daniel, on Tuesday, Feb. 9, 2016. He spoke to radio host Nachum Segal at Shaare Zedek the following day, while Segal was visiting as part of his Jewish Unity Initative.

Tomer’s description of the attack aired several hours later on the Wednesday, February 10, 2016 edition of  JM in the AM, as Segal and a team from his eponymous Nachum Segal Network broadcast to a waking east coast from a restaurant on Tel Aviv’s Rechov Dizengoff. Tomer, of Rosh Tzurim, told Segal he knows several previous victims of the ongoing wave of attacks and that it is “weird” to have become a target himself.

“I went for a run in the Gush, near Neveh Daniel, and I saw the attacker. He came towards me and I turned around to return to Rosh Tzurim, and then he started running after me, so I turned around with my fist toward him, and then I saw the knife,” he recalled. “He started to attack me so I defended myself. I kicked him as much as I could, and he hit me in the head and twice in the shoulder. After this he just turned around and ran away. I screamed for the guard who was 100 meters from me. He heard me and called the ambulance.” Tomer said he was stabbed 5 or 6 times in the head and twice in the shoulder, noting, “You always hear about it from afar; it’s always another person,” who is attacked.

Shaare Zedek has seen some 250 victims of “terror events in the last four months,” Dr. Merin said, as Israel endures near-daily attacks. “We do see, in all these months, more and more stabbings to the upper part of the body and I want to say very cautiously that we do see them trying to target critical areas in the upper body — either the chest or the neck. We saw tens of victims with stab wounds to the upper body, the last one yesterday.” Shootings, while less common in the current wave of terror attacks, do occur as well, Dr. Merin said, as do attacks in which vehicles are used as a weapon.

Dr. Merin, who holds the IDF rank of lieutenant colonel, also serves as chief of the IDF field hospital, which has responded to five international disasters in the past five years, including a catastrophic earthquake in Nepal in April, 2015. While Israel was just one of the many nations that responded, Dr. Merin said, “we had by far the largest intensive care unit — we brought an intensive care unit that, honestly, you would not see…in some of the major hospitals in Israel, in Europe and, I would say, even in the United States.” The UN ranked Israel’s field hospital the only level-three facility — the highest level of care — to respond to the Nepal disaster, he said. When personnel from the United States arrived, Dr. Merin recalled recalled be approached to confirm that Israel was willing to treat any Americans who might themselves require high-level care during the response. 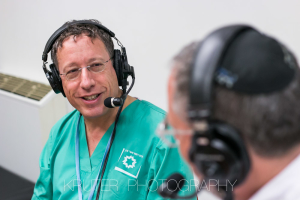 Professor Giora Weisz, director of the Bendheim Department of Cardiology in the Jesselson Heart Center at Shaare Zedek, with Nachum Segal.

Also Wednesday, Segal aired his conversations with Professor Giora Weisz, director of the Bendheim Department of Cardiology in the Jesselson Heart Center at Shaare Zedek, and with Dr. Shalom Strano, who heads the Breast Imaging Center. Segal’s conversation with Professor Gheona Altarescu, who heads Shaare Zedek’s PGD program in the Fuld Family Department of Medical Genetics — which she estimates has been responsible for nearly 500 births, so far, of babies free of the genetic diseases carried by their parents — was expected to air on Thursday.

Segal spent three hours at the hospital, taping the interviews and touring, including stops at the Weinstock Family Department of Emergency Medicine on the Fanya Gottesfeld Heller Floor; and the Huberfeld Neonatal Intensive Care Unit; before rushing to Tel Aviv for the live broadcast. “JM in the AM,” long considered the most listened to Jewish-oriented radio program anywhere outside of Israel, airs weekdays from 6:00 am- 9:00 am eastern, usually from a studio in Jersey City, New Jersey. 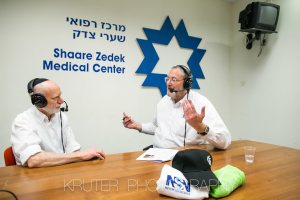 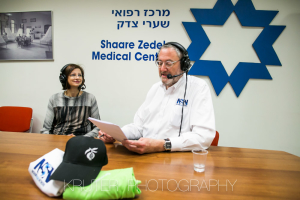 Professor Gheona Altarescu, director of the PGD unit at Shaare Zedek, responsible now for an estimated 500 health births of children of parents who are carriers of genetic diseases, with Nachum Segal at Shaare Zedek Medical Center on Feb. 10, 2016.

By admin|February 10th, 2016|Events, News|Comments Off on Nachum Segal and JM in the AM Visit Shaare Zedek