Remarks by David B. Keidan at dedication of The Juliet Keidan Institute of Paediatric Gastroenterology, Hepatology, and Nutrition in the Wilf Children’s Hospital 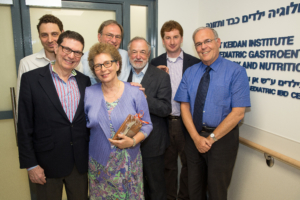 What a wonderful occasion this is – celebrating my mother with family and friends we have known for 70 years at a hospital that does so much good for people, in a country we love and admire.

Brian, Edwina and I, and my son, Jonathan, and Edwina’s son, Tim, are dedicating in our mother’s name, The Juliet Keidan Institute of Paediatric Gastroenterology, Hepatology, and Nutrition at Shaare Zedek.

It is extra special for us to be doing so in the presence of so many of our Bombay Jewish community who grew up with Mummy in their lives.

Mummy and we are products of this 200-year-old Baghdadi community.  We were small in number, fiercely proud of being Jews and fiercely loyal to Israel. Last Monday, we had a Habonim picnic to which 60 people spanning four generations showed up, and we sang, danced and saw pictures of ourselves from 1951 to 1963.  Many of us had not seen one another in 50 years, but it was as though it was yesterday.  I mention this as a backdrop to the importance and love which our Mum held for being Jewish and for Israel.

Children were also of prime importance to Mummy.  She loved them, individually and collectively. It was not just that they were our future; it was also because of their helplessness and their innocence, and the great opportunity they represented to make the world a better place if we took care of them, loved them and nurtured them with our great Jewish values.

So being able to bring Mum’s love for children and Israel and pride in being Jewish together in one place at Shaare Zedek is an honour for us. We made this gift for Mum’s 100th birthday about three years ago, so she knew about it, and we feel very good about that.

As with so many Jewish communities around the world, our Bombay community has shrunk, so that now there are only 10 members left.  But the largest number came to Israel.  Mummy is gone, as are many of her contemporaries and the parents of so many of us, but as Brian wrote, “Mum’s memory will live on through all the children who are treated at `her’ department.”  And we look to Jonathan Halevy, who runs this great institution, and Dan Turner, who runs this department, to make Mum’s dream and the dreams of all of us come true.