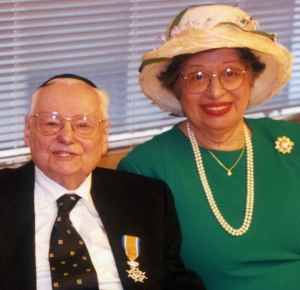 Bram and Irma Lopes Cardozo z”l, were a legendary team on the West Side. Irma was born in Suriname, Dutch Guyana, to community leaders who had escaped from Spain in the 1700s. Bram was born in Amsterdam to a famous rabbinic family. At age 25, he escaped to Suriname, where he served as rabbi and mohel. A world-renowned expert in Western Sephardic customs and music, Bram served as Hazzan of the Spanish and Portuguese Synagogue for more than 50 years and taught at Yeshiva University. In 2000, Bram was knighted by the Queen of Holland for his service to the Jewish community.

Irma forged her own path as an advocate for Jewish children, Jewish education, immigrants, the poor and the State of Israel. Among other leadership positions, she was a founder of the Sephardic Studies Program at YU, the American Sephardi Federation, American Friends of Misgav Ladach Hospital, and American Friends of Jaffa Institute. She served as president of the Spanish and Portuguese Synagogue Sisterhood, Women’s Division of the Central Sephardic Jewish Community and Co-President of the Joint Passover Association.

Like the tent of Abraham and Sarah, the Cardozo home was open to all, and their presence in New York and in Israel is sorely missed. To commemorate the first yahrzeit of Irma, her daughters, Debbie Smith and Judy Cardozo Tenenbaum, have chosen to embark on a campaign to raise funds for Giraffe Incubators in the Shaare Zedek Neonatal Intensive Care Unit, a cause that was so close to Irma’s heart. The American Committee is so proud to honor the memory of these two great Jewish leaders.