It’s been several years since Ahuva (Huvi) Hirschey of Elizabeth, NJ, first visited the maternity ward at Shaare Zedek Medical Center in Jerusalem where her grandmother volunteers. Huvi, now 12, was a little girl at the time. But what her bubby, Jacqueline Maltz, told her then left a lasting impression: many babies born at Shaare Zedek each year won’t have a new outfit to wear home. Some are born into large families and receive older siblings’ hand-me-downs; others are born into families that simply can not afford a new outfit that will shortly be outgrown. Even more difficult is when a baby is born with a disability; often then people hesitate before even congratulating the parents, let alone offering a gift. 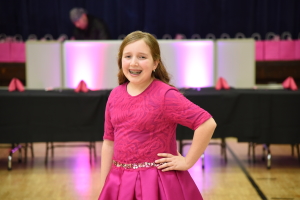 Huvi, whose smile lights up a room, decided that encouraging her guests to help would be an important part of her bat mitzvah celebration. The sixth grader at Joseph Kushner Hebrew Academy in Livingston included a note with her invitation that read, “My Bubby volunteers in the maternity department at Shaare Zedek hospital. Can you believe that more than 20,000 babies are born there each year? My Bubby told me that there are many mothers who are very poor and do not have a new outfit to put on their babies to go home. I really think that every new baby should go home wearing something new and not something torn or stained, and that is why I am asking for your help…” She asked for donations of new baby clothing and blankets.

The response was overwhelming. People brought shopping bags filled with adorable new baby clothes; over 500 outfits were collected. Huvi’s uncle, a frequent commuter between Israel and the U.S., has been delivering onesies by the duffel bag. Earlier this month, Huvi’s mother, Dvora Hirschey, briefly visited Israel to spend several days giving out the clothing alongside her mother, Jackie Maltz.

“It is heart wrenching for me when new mothers ask if they could take their baby home in hospital clothing since they really don’t have anything else for the baby to wear,” Jackie shared. “Or, sometimes, parents bring a badly stained or torn outfit for their newborn to wear home. It’s very emotional for me, giving out these outfits and knowing that my granddaughter helped these new parents.”

Jackie has been a hospital volunteer since soon after she and her husband, Chaim (Herbie), moved to Israel in 2008. She’s now a regular on the new Shapiro Hochstein Maternity D unit in Shaare Zedek’s Wilf Woman and Infant Center. Her daughter, however, was seeing it for the first time.

“We were actually watching the midwives bring the babies straight from delivery. The nurses are great. The care is great. The hospital is beautiful. It’s an amazing place to have a baby,” said Dvora, adding that she’d very much like to see Huvi’s project continue. “This was a little chesed project and it went far — we didn’t realize how far it would go. People really appreciated getting an outfit. And I would love it if other kids would want to follow up and continue collecting. My hope is that other people would be moved to help Shaare Zedek, too.”

As it happens, this was not the first project for needy newborns that the Maltz’s have been involved with since their aliyah.

“Mothers were leaving the hospital in taxis holding newborns on their lap, and there were a few incidents of babies rolling off their laps,” Dvora explained. So, a number of years ago, Jackie and Chaim launched the Chana Maltz Car Seat Gemach, to help ensure that discharged newborns could ride home safely. They raised money to buy hundreds of car seats that are now loaned out by the Yad Sarah organization from an office in the hospital. Later, taxi drivers return the car seats to the hospital.

22,400 babies were born last year at Shaare Zedek Medical Center in Jerusalem. To learn how you could launch a project to help the hospital, please contact Sharon Goldwyn at sgoldwyn@acsz.org.